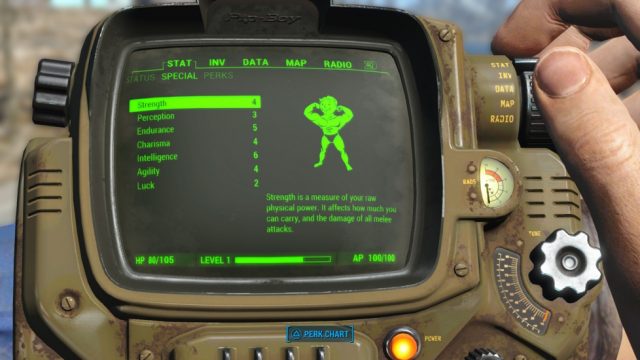 Strength is a measure of your raw physical power. It affects how much you can carry, and the damage of all melee attacks.

Perception is your environmental awareness and "sixth sense", and affects weapon accuracy in V.A.T.S.

Endurance is a measure of your overall physical fitness. It affects your total Health and the Action Point drain from sprinting.

Charisma is your ability to charm and convince others. It affects your success to persuade in dialogue and prices when you barter.

Intelligence is a measure of your overall mental acuity, and affects the number of edxperience points earned.

Agility is a measure of your overall finesse and reflexes. It affects the number of Action Points in V.A.T.S. and your ability to sneak.

Luck is a measure of your general good fortune, and affects the recharge rate of Critical Hits.

You find even more bottle caps in containers.

Channel the spirit of the Old West! Non-automatic pistols do 20% more damage.

Let Vault-Tec guide you! The path to your closest quest target is displayed in V.A.T.S.

Buying and selling prices at vendors are now much better.

You now have +20 Damage Resistance.

Channel your chi to unleash devastating fury! Punching attacks do 20% more damage to your opponent.

Swing for the fences! Do 20% more melee weapon damage.

Keep your distance long and your kill-count high. Attacks with non-automatic rifles do 20% more damage.

Your digestive tract has adjusted to the weirdness of the Wasteland! Take less radiation from eating or drinking.

You're charming… and dangerous. Women suffer +5% damage in combat, and are easier to persuade in combat.

You find even more ammunition in containers.

You now inflict +10% damage in combat.

Become whisper, become shadow. You are 20% harder to detect while sneaking.

Shoot first, kill first, with access to base level and Rank 1 gun mods.

Who needs friends, anyway? When adventuring without a companion, you take 15% less damage and carry weight increases by 50.

You Instantly gain another +20 maximum Health.

To defeat your enemies, know their weaknesses! You can view a target's specific damage resistances in V.A.T.S.

Protect yourself from the dangers of the Wasteland with access to base level and Rank 1 armor mods.

Fire up the forge and gain access to base level and Rank 1 melee weapon mods.

Your nimble fingers allow you to pick Advanced locks.

All the rush without the Hassle! You're 50% less likely to get addicted when consuming chems.

Your faithful canine companion can hold an enemy, giving you a greater chance to hit them in V.A.T.S.

As an agent of death itself, you can instantly kill a sleeping person. Your silenced weapons do an additional 15% sneak attack damage.

Who is he? Why does he help? Who cares! The Mysterious Stranger will appear occasionally in V.A.T.S. to lend a hand, with deadly efficiency…

You're not stupid! Just… different. Randomly receive 3x XP from any action, and the lower your Intelligence, the greater the chance.

There's no time to waste! Your Action Points regenerate 25% faster.

Waste not, want not! You can salvage uncommon components like screws, aluminum, and copper when scrapping weapons and armor.

Commune with beasts! With your gun, aim at any animal below your level and gain a chance to pacify it.

Water is your ally. You no longer take radiation damage from swimming, and can breathe underwater.

The bigger the boom, the better! Your explosives do 25% more damage, and you can craft explosives at any Chemistry Station.

Thanks to practice and conditioning, heavy guns do 20% more damage.

What are you, part pack mule? Gain 25% to carry weight.

Exposure to the Wasteland has made you more resilient, instantly granting +10 Radiation Resistance.

As the ruler everyone turns to, you are able to establish supply lines between your workshop settlements.

Take full advantage of advanced technology with access to base level and Rank 1 high-tech mods.

They can't hurt what they can't hit! Get +25 Damage Resistance and +25 Energy Resistance when you're sprinting.

You're a patient battlefield technician, and can save a Critical Hit, to be used in V.A.T.S. when you need it the most.

Any chems you take last 50% longer. Far out.

Nobody has a good time like you! There's no chance you'll get addicted to alcohol.

Your skeleton has been infused with indestructible metal, reducing limb damage by 30%.

You must be part mirror! Instantly gain +10 Energy Resistance.

Stay on target! Hip-fire accuracy is improved when firing any gun.

Get up close and personal! Gun bashing does 25% more damage.

It's all about focus. You have improved control and can hold your breath longer when aiming with scopes.

Because you lead by example, your companion does more damage in combat, and cannot hurt you.

Machines will always serve humans, if you have anything to say about it. Hack a robot, and gain a chance to power it on or off, or initiate a self-destruct.

In combat, there's no time to hesitate. You can reload all guns faster.

Death becomes you! Any kill in V.A.T.S. has a 15% chance to restore all Action Points.

Feeling Lucky? You should! Each hit in V.A.T.S. has a chance of filling your Critical meter.

Find the gap and make the tackle! V.A.T.S. melee distance is increased significantly.

You've learned to split the atom… and command it. Radiation weapons do 50% more damage and Fusion Cores last an extra 25% longer.

Master the post-apocalypse! With your gun, aim at any Wasteland creature below your level and gain a chance to pacify it.

Sure, you're still human – on the outside! Radiation now regenerates your lost Health.

There's no place to hide! In V.A.T.S. you can target an enemy's body parts that are blocked by cover, with a decrease in accuracy.

You're part tree! While standing still, you gain +25 Damage Resistance and your melee and unarmed attacks deal 25% more damage.

Choo choo! While wearing Power Armor, sprinting into enemies hurts and staggers them.

Stay focused! In V.A.T.S. every attack on the same body part gains +10% accuracy.

Time to show everyone who's boss! With your gun, aim at any human opponent below your level and gain a chance to pacify them.

Genius. Is. ANGRY! When your Health drops below 20%, time slows and you gain +20 Damage Resistance and do 20% more damage while the effect lasts.

You've learned to apply ancient martial arts to gunplay! Do 25% more damage to your second V.A.T.S. target and beyond.

What goes around comes around! An enemy's ranged attack will sometimes ricochet back and instantly kill them. The closer you are to death, the higher the chance.
Read more at http://www.gamerevolution.com/faq/fallout-4/full-list-of-perks-and-their-details-119521#G4tvHLebutg4vPXe.99 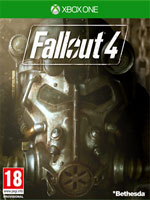