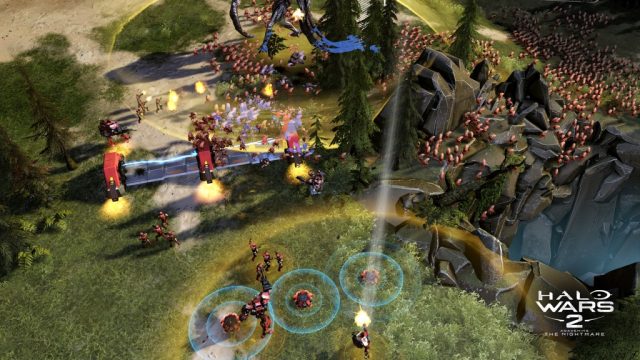 Global Changes
To help increase the usability of turret drops and bunkers, we have reduced the amount of damage mines do towards buildings

UNSC Units
Vultures
Vultures have been dominating a bit too much and are too effective directly vs. the units that are meant to counter them. Some changes are being made to help reduce their dominance.

Marines
In the early game, grenades have a hard time landing on well controlled scout units. We are making a change to help improve this interaction.

Scorpions
Scorpions are weaker compared to other tanks in game. Damage is being increased to help make them more viable.

UNSC Leaders
Jerome
His hero unit along with Time For Heroes buffs would outrun most units. We have moved to reduce the units base speed by 25% to compensate this buff.

Forge
His hero unit is still difficult to kill, so he is getting a nerf to Health and Shield increases on the tier 2 and 3 upgrades.

Serina
Frostravens are continuing to struggle in Serina’s toolkit. To help improve their viability we are reducing their cost and cooldown of their ability to help better this unit.

Kinsano
Hellcharge investment does not reward players compared to other options in Kinsano’s leader power wheel. We are improving each tier to make the investment more worth it.

Johnson
Getting bunkers out earlier for Johnson to make use of them has been problematic. These changes will help increase their viability.

Anders
Protector Sentinels are more a nuisance early game and difficult to really utilize as intended. To make them easier to use in strategies we are changing their price. Anders’ hero unit Douglas is a bit too strong when acquiring his rocket launcher upgrade.

Douglas HeroUnit: Rocket Launcher damage reduced by 10%.Banished Units
Shield Generators
Shields on Banished bases are a bit too hard to break through at the moment when attacking Banished bases so we are bringing their effectiveness down slightly

Suicide Grunts
These units stun buildings for a very long time when they attack them and stops production on the attacked building. We are reducing this effect.

Ghosts
These units have a slow ram speed from when the ability is initiated to impact so we are making adjustments to improve their effectiveness at ramming.

Choppers
These units cause too much damage with their ram ability currently, so we are reducing that base damage.

Wraith
Banished tanks currently overpower their counter units, so a reduction in effectiveness vs. Anti-Vehicle units is being applied to their damage type.

Banished Leaders
Voridus
When players get caught in Voridus infusion, slow moving infantry is punished too much and can be denied areas with infusion for too long.

Pavium
Pavium is not performing as we want him to. To help bring him up we are making changes to his Hero units’ slow and moving around some leader powers to help early game.

Yapyap THE DESTROYER
Yapyap’s turret drop ability is abusable with chaining the stuns on armies and this ends NOW!

Colony
The Hunter Captain can be very hard to kill in most situations. We’re making a subtle change to this.