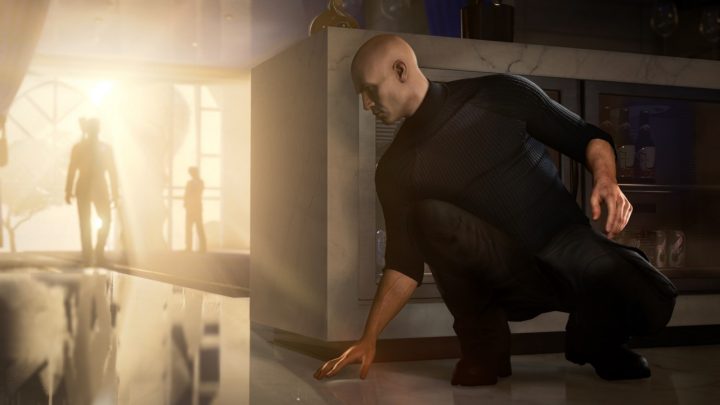 The Tactical Turtleneck is now an unlockable suit for all HITMAN 3 players. Once unlocked, it will be added to your inventory and can be used on any location that allows you to choose a suit. To get your hands on it, you’ll have to return to the ICA Facility and complete The Final Test.

New Deluxe Content
Owners of the HITMAN 3 Deluxe Edition or Deluxe Pack will get access to new content this month, as part of the ongoing rollout of Deluxe conent. This will bring the total number of released Deluxe Escalations to 5/6. We expect to release the final Deluxe Escalation – and therefore all content included in the Deluxe Pack – in March 2021. Here’s what’s included in February for Deluxe Edition/Pack owners:

Deluxe Escalation: The Proloff Parable
Become The White Shadow and use the White Custom Sieger 300 and White Katana to complete this challenging Escalation in the Carpathian Mountains. Complete all stages and all of the items will be in your inventory. 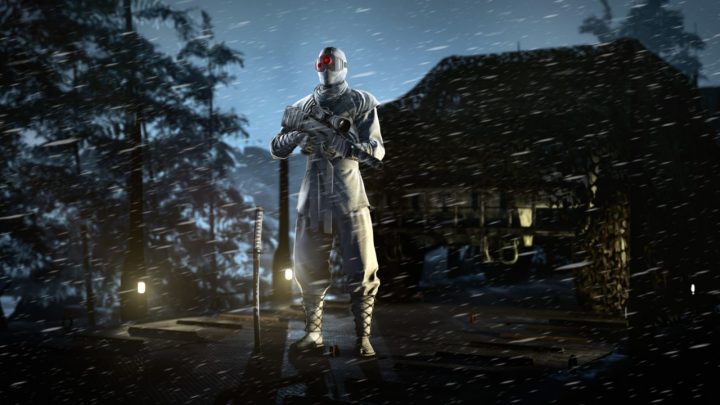 Deluxe Escalation: The Gauchito Antiquity
Get ready for The Guru to give you a taste of his emetic medicine in Mendoza. With the Emetic Grenade and Emetic Pen Syringe at your disposal, you’ll need to work through all stages to unlock the three items for your inventory. 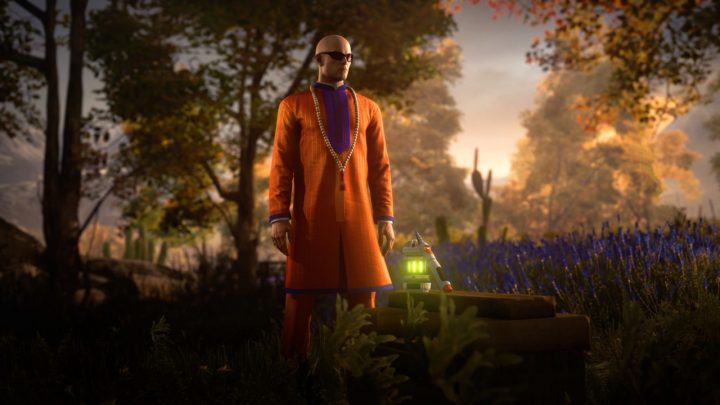 Deluxe Content
We’ve fixed an issue that could prevent some players from being able to access their Deluxe Edition content (digital book and soundtracks) via IOI Account. After installing this patch, players should first launch HITMAN 3 and then check the ‘Rewards’ section of their IOI Account profile. It may take up to 15 minutes for the downloads to appear after playing HITMAN 3.

Connectivity
We’ve made several tweaks on the back-end since launch and this first major patch allows us to do more. We’ve made several technical improvements and tweaks that will result in a smoother and more stable experience for all players. This will also improve the experience for players who were receiving errors when trying to exit a mission.

Stability
We’ve resolved multiple, wide-ranging issues that were causing the game to crash for various reasons. Players on all platforms will benefit from these improvements.

Trophies/Achievements
We’ve resolved an issue that could prevent the “Reach Mastery Level 20” achievements/trophies from triggering, despite players reaching that milestone. In some cases, this issue could also prevent PlayStation players from earning the Platinum trophy. Players that have been affected should unlock the relevant trophies/achievements when they launch the game after installing the 3.11 patch.

Trespassing Agility
We’ve updated the HUD rules to accurately display when Agent 47 is trespassing whilst performing agility moves (climbing, vaulting, etc). In the past, the HUD would show that all pipes and ledges were ‘non-trespassing’ even when that wasn’t the case. In truth, 47 was trespassing, but the HUD didn’t reflect that.

This change will mean that the HUD will display accurately when you are trespassing. This may cause for some inconsistencies (such as only half of a drain pipe being a trespass zone), but the information you see will now be accurate according to the mission setups. We’re monitoring any further issues that might come up on this.

Recording Eraser
We’ve added a new state to the Silent Assassin HUD. This third state will display when the SA rating is still possible, but 47 needs to erase recordings before exiting the level. This will be shown as an orange/yellow blinking image of the usual SA HUD image and a security camera.

Fail Better
We’ve adjusted the red SA HUD indicator (SA ‘failed’) to make it easier to identify when compared to the green state. The red icon is now a red outline of the SA HUD icon, rather than a solid red colour. The green icon remains solid. This should make the red and green states easier to identify for some colorblind players.

Unintended Base Jump
We’ve adjusted a few places where Agent 47 would jump off the side of the building and outside of the playable area instead of ‘vaulting’, like the prompt suggests he can. This includes the one you might have encountered when throwing knives at boxes in the Sinbad Stringent Escalation.

No Ghost
We’ve adjusted the weapon protocols in Dubai so that security guards (or anyone disguised as one) are unable to openly carry sniper rifles. They’re now restricted in all disguises and will be enforced accordingly.

Incorrect Arabic
We’ve adjusted the Arabic script used on the information boards around the location. The text is now displayed in the correct way and with improved accuracy for some of the translations.

Invisible Walls
We’ve removed two invisible walls that could partially block Agent 47 from freely moving through the ventilation room near the Penthouse.

Lockdown
We’ve resolved an issue where players could be unable to complete the How The Mighty Fall Mission Story after triggering the silent alarm and then being compromised by the investigating guards.

Top Gear
We’ve resolved an issue where the Top Gear challenge wouldn’t unlock. This was only an issue if you chose to get on the bike from one particular side. Now, you can get on however you want and still get the challenge.

Mr Pond
We’ve resolved an issue where bodies that were ‘dumped’ in the pond were not always ‘hidden’ and could be discoverd.

Canal Man
We’ve resolved an issue where Agent 47 could fall out of the playable area. In several different places. It was almost as if he was trying to escape.

Equip: Wrench
We’ve removed the manhole in Berlin as it was causing several issues. There are healthier alternatives to dumping bodies or leaving the mission. They are now your go-to.

PumpCap
We’ve resolved an issue where players could get stuck after taking cover next to a petrol pump.

Tremaine’s Pain
We’ve resolved a complicated issue that could cause the game to crash when eliminating or subduing a specific target (Agent  Tremaine) after performing specific events prior to that.

Confused Shortcuts
We’ve resolved an issue where unlocking the Facility Elevator Shaft shortcut would unlock the challenge for unlocking the Inner Courtyard shortcut, and vice versa.

The All-Seeing Controller
We’ve resolved an issue where players could not complete either The Controller or the All Seeing Eyes Mission Story on Master Difficulty. We’ve also fixed a related issue that would prevent the description for All Seeing Eyes from displaying in the notebook.

Laundromat
We’ve resolved an issue where the technologically advanced ‘invisible’ washing machines that we added to Chongqing were causing players to report them as bugged. We’ve reverted them to the ‘normal’ type of washing machines you’d expect to see. We would like to take this time to thank everyone else who understood what we were going for.

Illegal Umbrellas
We’ve resolved another ‘innocent item is illegal on casual difficulty’ issue. This time it was the umbrella.

Double O Double U
We’ve resolved a(nother) handful of issues where it was possible for 47 to fall outside of the playing space. He’s persistent.

Falsk Frisk
We’ve changed the behaviour of the guards on top of the apartment building roof so that they no longer frisk 47 when he’s wearing a guard disguise.

M.C Fusebox
We’ve resolved an issue where disabling a fusebox near the Lotus Passage could eventually attract a large amount of guards one at a time. Now, only a handful that are nearby will be tempted.

The Tour
We’ve resolved a few issues where players would be unable to progress or complete The Tour Mission Story, depending on their actions.

Oh Snap 2.0
We’ve resolved an issue where a small speech bubble saying “Oh Snap” would appear in the level, seemingly at random. Not sure what else to say about this one. No more speech bubbles.

Frost
We’ve resolved an issue where NPCs could see through the frosted glass in the wine cellar. Now, it’s really good frosted glass, so they won’t see anything you do, at all.

Cacti
We’ve trimmed the cactuses near to the Backdoor shortcut to prevent 47 getting stuck behind them.

Arachnid Pointing Meme
We’ve made a change to the Winemaker’s behaviour so that they will now enforce their own disguise, should they be knocked out and then woken up again. Previously, they’d be completely okay with overcoming a headache and watching someone else wearing their clothes.

For My Next Trick
We’ve fixed an issue where all the items in a specific room in the Steel Tank area would ‘disappear’ when 47 was stood in a specific place.

A Generic Patch Note
We’ve tweaked some behaviours for some guards to be more consistent around the Winery Cinema. We’ve been vague here to avoid describing something cool that shouldn’t be revealed in our patch notes.

Snow Dive
We’ve tweaked some of the agility setups on the roof of the train to prevent 47 falling off and getting lost in the wilderness.

Hello, Old Friend
We’ve adjusted the background contrast of the mission end screens to make them darker. The intention is to make the white text easier to read.

MinniMap
We’ve moved the border of the mini map to properly align it with the actual map. It was misaligned by a few pixels.

Oh Snap! 1.0
We’ve added a full description to the camera item when viewed in the inventory.

Intel Acquired
We have updated the images for some Intel items on the Berlin and Carpathian Mountains campaign mission.

Just A Matter…
We’ve reviewed and updated the inventory images for some items to make sure that their size and perspective fits better with the other items.

UD; LR
We’ve tweaked the display of the ‘d-pad’ icons in the menus to make them easier to identify. For example, when we show how to switch ammo types in Sniper Assassin.

Place Down
We’ve tweaked the indicator for placing an item so that it’s easier to see in some instances.

Sneak Level 47
We’ve fixed an issue where we didn’t tell you the exact button to press for crouching. It’s quite important that you know how to sneak, so we’ve fixed that.

Where It’s Due, 3.11
We have updated the HITMAN 3 credits to reflect the work that has been done since we submitted the game for release. We also correct a few errors and included new members of the team.

No Discovery For You!
We’ve resolved an issue that could cause the ‘Discover [Location]’ challenges to not complete. The issue was caused by players discovering areas whilst in the ‘Contract Creation’ mode and those ‘discoveries’ were not being added to the total amount. With this fix, when discovering locations in Contracts Mode, players will see that the areas have been discovered when they launch a mission in that location and then complete (or quit) the mission.

Two Suave For You
We’ve resolved an issue where the Summer Suave Suit was listed as an unlockable for two different challenges. Now, the suit will be unlocked only when completing the ‘Escalations – Track 2, Tier 9’ challenge.

A Mansion in the Mountains
We’ve added the briefing video for the Himmelstein Sniper Assassin map back into the game. It was AWOL.

Sniper Rifle Mastery
We’ve resolved an issue where the Mastery upgrades that players had earned were not added to the rifle and players were always using the ‘base’ rifle regardless of their upgrades. Now, the earned progress will be reflected accurately with the correct upgrades.