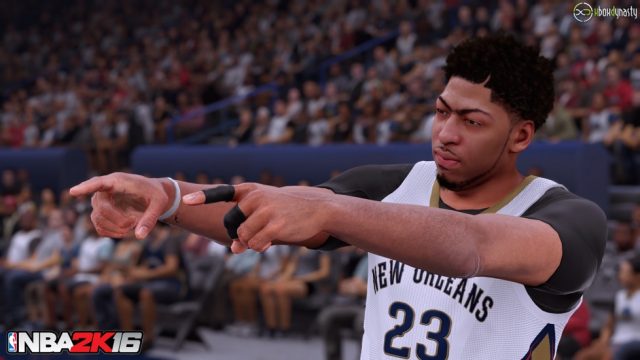 – Resolved a rare case where the game would hang when entering/exiting the Tattoo editor when customizing the tattoos on your MyPLAYER.

– Addressed an issue on the main menu where the title would freeze for a period of time before proceeding to the selected action (e.g. loading a MyCAREER save).

– Tuned player sweat so that its effects are much more visible when playing longer quarter lengths.

– Players will no longer slide/skate when pressing the block button during an inbound state.  It was funny while it lasted.

– Tuned crowd excitement and intensity on made buzzer beaters.

– Resolved a case where certain players (e.g. Kristaps Porzingis) would have their hairstyle change slightly when zooming in the camera very close in replay.

– Pro-Am Team Play has been added to the game!  You can now play as a full team in your custom-built arenas.

– Addressed a number of matchmaking issues that inhibited users from playing in Pro-Am Walk-On games.

– Fixed an issue where your player would sometimes appear with the incorrect height (if you had more than one MyCAREER save file) when entering MyPARK/Pro-Am from within MyCAREER.

– Fixed a rare case where the ball would get stuck in the High Roller courts, thus preventing a game from concluding.

– Improved voice chat support in both MyPARK and 2K Pro-Am.

– Improved the animation of the skateboard in MyPARK.  If you don’t have this, get it.  You can move between courts faster than those that are on-foot!

– 2K Bats will now continue to play after finishing a game in MyPARK.

– Fixed an issue where some users were unable to join their friends’ MyCOURTs.

– Fixed an issue where the host user was unable to send MyCOURT invites after leaving MyPARK/Pro-Am with a squad.

– Addressed a number of issues with Accolades not unlocking at the appropriate time within MyCAREER.

– Pressing the back button will no longer cause the game to hang from the MyCAREER NEXT menu after being eliminated from the playoffs.

– Playoff games (within a series) can no longer be played out of order in MyLEAGUE Online.

– Found and fixed a case where visiting certain submenus with no head coach would cause the game to hang.

– Fans of relocated/rebranded teams will no longer hold up signs referencing the previous identity of the team.

– Fixed a rare hang that could occur when the ticker referenced a previous game result where all of the players on the team have since been traded.

– Selecting to load a custom draft class will no longer cause a game hang in the MyGM offseason if you had previously been fired during that same offseason.

NOTE: All patch fixes will work in your existing game mode saves.