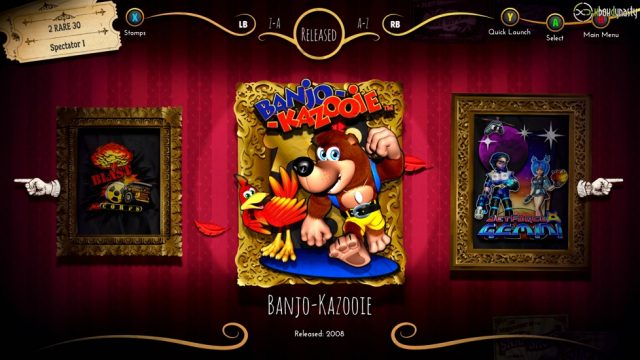 Jetpac (1983, 1-2 players) – A single-screen shooter where Jetman must reassemble and fuel his rocket while fending off alien hordes.

Lunar Jetman (1983, 1-2 players) – A return to the Jetpac sidescrolling formula, but with a scrolling, randomly generated landscape and much more to do.

Sabre Wulf (1984, 1-2 players) – A classic jungle maze game and the first appearance of explorer Sabreman, tackling dangers including the vicious ’Wulf itself.

Underwurlde (1984, 1 player) – Rare’s first true platform game. Help Sabreman survive the perils of the Underwurlde and escape through one of three exits.

Knight Lore (1984, 1 player) – The introduction of Ultimate’s groundbreaking isometric Filmation engine. Sabreman must scour the castle for items to cure his werewolf curse.

Gunfright (1986, 1-2 players) – A Wild West spin on the isometric style, with an improved engine and new first-person target-shooting sections.

Slalom (1987, 1-2 players) – Rare’s first console game. Make it to the bottom of each course before time runs out, while avoiding trees, sledders, snowmen, and other skiers.

Cobra Triangle (1989, 1 player) – Hop into a boat and power through a branching game world, completing challenges such as shooting targets, disposing of mines, and defeating leviathans.

Solar Jetman (1990, 1 player) – A game built around exploration and physics; Jetman has to tow fuel and other items to his mothership.

Battletoads (1991, 1-2 players) – Skill and perseverance as required as the ’Toads take on multiple game styles to rescue Pimple and Princess Angelica from the Dark Queen.

Battletoads Arcade (1994) – The first Battletoads game to allow all three ‘Toads to play simultaneously. It has never had a home release… until now!

Blast Corps (1997, 1 player) – This cult classic sports a fleet of destructive vehicles (from bulldozers to robots), used to clear the path for a runaway nuclear missile carrier.

Perfect Dark (2000, 1-4 players) – In this stealth-based shooter set in the year 2030, players lead secret agent Joanna Dark against the DataDyne Corporation, uncovering an alien conspiracy that takes her around the world.

Grabbed by the Ghoulies (2003, 1 player) – Rare’s first Xbox game! A comic book beat-’em-up, set in a haunted house filled with breakable scenery and Ghoulies of all kinds.

Kameo: Elements of Power (2005, 1-2 players locally or online) – A fantasy adventure focused on combat and exploration, with Kameo able to transform into 10 different Elemental Warriors.

Viva Piñata (2006, 1-2 players locally) – A magical gardening/life sim, in which the player can cultivate a garden paradise, attract different Piñatas, and keep them safe from Professor Pester and his Ruffians.

Jetpac Refuelled (2007, 1-2 players locally or online) – A modern update to Jetpac. Assemble and fuel your rocket before blasting off to the next of 128 challenging stages.

Banjo-Kazooie: Nuts & Bolts (2008, 1-2 players locally, up to 4 players online) – A more open-ended, customizable approach to the Banjo series, with vehicle-based challenges set by L.O.G. (the Lord of Games).

Viva Piñata: Trouble in Paradise (2008, 1-2 players locally or online) – The sequel to Viva Piñata features new species of piñatas, as well as desert and arctic regions to capture them from. 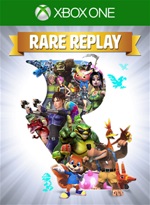